I’ll start off by fully

disclosing that I do use social media occasionally, primarily Facebook and Twitter. I’m by no means anti-posting, tweeting, or whatever floats your boat. Hell, I’m pretty libertarian so I don’t care what you do if it’s on your own time with your own money in your own space.

I suppose Social Media, on your site, qualifies. The thing that I’m puzzled by most is that anyone would believe that their opinion, in the form of a Post, Meme, Comment, Like, Retweet and so on matters in the scheme of things that we call life. People get in the most disturbing 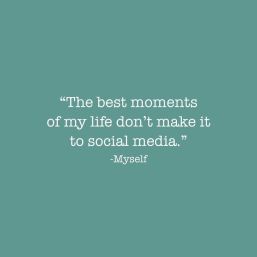 arguments over nothing, literally nothing that will change anything, ever.

I might go weeks, sometimes even months without visiting my FB page, why would I visit yours? Don’t get me wrong, I enjoy seeing pictures from friends, or hearing about something important in their life, business or an interesting tidbit they wish to share. Those things happen just occasionally, most of us are not that interesting, at least to the rest of the population.

General Bernard Bee didn’t say “Look there stands Jackson, did you see his tweet? Robert Frost didn’t say Two roads diverged in a yellow wood and I took the one with fewer Likes…hopefully, you get the idea.

Recently a third,  or fourth cousin that I never met passed away at a young age, tragically from an automobile collision in another state. My mother, who does not even have an internet connection and would not know what Social Media is if it fell on her found out from all places, wait for it…Facebook! A relative of a relative saw the post and passed it along. She, in turn, told me.

A few years ago maybe none of us would have heard. I know some of the extended family, and my heart goes out to them. At the same time, I’ve never met most of them, never shared life with them, nor them with me. If we were in line together at the bank I wouldn’t recognize them. I’m saddened for them, but at the same time can that emotion really be genuine, other than the grief we would feel for anyone, stranger or not in such circumstances?

Then there are those that believe in posting their mental status, deranged or otherwise. We all have blue days, and no one goes through life undefeated. But why define yourself that way, and permanently for all to judge?

I think it’s that artificiality that bothers me the most. Sure I will continue to occasionally post about writing, or skiing, or maybe a family trip. I do that to connect with others, like the type of conversation you have with someone you see now and then and want to catch up.

All the rest? It’ll be fodder for the ages, and us right along with it if we’re not careful.

I’m reminded of a saying:

Every morning in Africa a Gazelle wakes up at 0530 AM. It knows that it must outrun the fastest lion if it wants to live another day.

At the same time, a Lion wakes as well. It knows it must be able to outrun the slowest Gazelle that day or it will starve.

Whatever your station in life you must be moving. Engage life and live on your terms, not on what’s trending.