If you are familiar with either of my “Devolution” books then you may be familiar with “IRL” which is what all the kids (and adult gamers) use as shorthand for “In Real Life.” Reading my books, social media postings, or following this blog probably has made you aware that skiing, and teaching others to ski is one of my passions.

As a full-time Ski Instructor who spends over 100 days on skis, literally spending more of my time sliding than walking November through April, one of my longtime goals has been pursuing the certification pathway established by the Professional Ski Instructors of America. 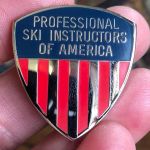 The PSIA is the industry standard and the Rocky Mountain Division that I am a part of is widely considered the division with the most demanding exams and Examiners.

This last season I trained and studied for the grueling three-day Level II exam held in Breckenridge in late February. I was one of three Instructors out of the group of seven to pass and be awarded a silver pin.

To achieve full-certification (a Gold Pin) one must pass a total of five exams. The level-one (bronze) is followed by the Child-Specialist-One which along with a number of other prerequisites, including running a race course with a certain time requirement gives you eligibility to become a candidate for the Level II Exam. Then the process repeats with a Child-Specialist-Two exam followed by more prerequisites and more demanding race time.

While Level-One is a supportive exam with coaching, the next four are considerably less so. It gets increasingly serious at these levels. You will be accessed on your teaching, people, and technical skills with little to no coaching or assistance. You either meet the standard or you do not.

It is not necessary to work successfully as a Ski Instructor to possess more than a Level-One Certification, by far the level held by a majority of Ski Instructors in the USA. However, if you would like to teach or coach upper level and peer skiers or train other instructors, Level II and Level III become the standards, hence they are not easy to attain. The Level II pass rate in the Rocky Mountain Division averages around sixty-percent, while Level III is about half that. It is not uncommon to spend many seasons and make several attempts at the exams above Level I.

So while I do spend a lot of my days plotting and planning what my characters do in a make-believe-world I do also live IRL. For me this last season that meant preparing for and attaining a challenging goal. If you have ever gone through the process then you know that achieving it is its own reward!

Now with this particular IRL achievement out of the way, I can retreat into the deep recesses my mind, or somewhere thereabouts and finish both of the next two books in the “Metaverse Series.”

Then it will be back to IRL in the fall, with a little living in between.

All things in moderation.