Home › Uncategorized › What’s In A Name?

What’s In A Name?

Friends and relatives who visit us here in the “Land of Enchantment” otherwise known as the State of New Mexico are often surprised about two things:

The first one I put up only half in jest. But some people who may need to brush up on their geography sometimes believe that the southern border of Colorado separates the USA from Mexico. They may be surprised to 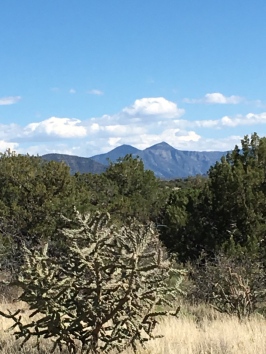 find out that New Mexico became a state before Arizona, although just by six months in 1912.

Previously both were part of the New Mexico Territory. Arizona kept the title that the Spanish converted from the Papago “ali-shonak” meaning “small spring.” Our state retained the connection to Mexico and Spain, confusing Easterners and others ever since.

Unlike Arizona much of which is warm even in the winter, New Mexico, particularly the Central and Northern portions have a full four seasons. Of course, there are exceptions to every rule. Parts of Arizona get cold while portions of New Mexico remain warm even in January, bringing me to the main point of my post.

I reside in what we call the “High Desert,” which also happens to be part of the name of this website and my Twitter Handle. Everyone can imagine a desert, lots of brown sand, little vegetation and even less water. But what then is the High Desert? A standard definition is above 4,000 feet in elevation with less than 10 inches of annual precipitation. New Mexico’s mean elevation is 5,700 feet above sea level but our annual rainfall averages around 14 inches while the snowfall averages around 22 inches.  Of course being averages, there are the extremes like the 100 inches of snow some of our mountains received this last winter.

oothills of the Southern Rocky Mountains where our home is located is around 6,800 feet above sea level. We receive above the snow and rainfall averages for the state. That elevation, well above a mile, along with the greater precipitation gives us some green in the spring and summer and some white in the fall and winter. The parking lot of Ski Santa Fe where I instruct skiing is at 10,350 feet. The peaks towering above the base area extend to over, 12,000 making it one of, if not the highest lift-served ski terrain in North America.

The name High Desert may not define precisely the topography of where I live, but I will nonetheless keep it. The photos are from the open space just a short walk from my home. It’s a place of peace and reflection where I plot and plan what the characters in my books do. It’s a great place to work through and overcome writer’s block and plot holes because you place those things in the back of your mind when you are surrounded by such grandeur. As you hike along your subconscious works out all of the details.

It’s not the desert, and it’s not the mountains, but it is a place I love. I think I’ll keep the name.

« Opposites Attract
Of Zombies And Men »