The American Handgun (from Europe) 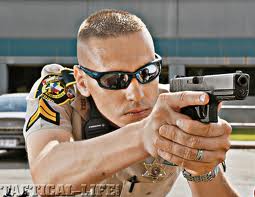 Ok first we have to start with some definitions.

Malfunction: A condition in which a weapon does not function that can be fixed very quickly by its operator so that it can rejoin the fight.

Jam: A condition where the weapon does not function and can not be fixed quickly by the operator rendering it useless unless you are at sea and in need of a boat anchor.

Clip: Retains ammunition or is used to hold a woman’s hair in place.

I am not your typical “Gun Nut.” In fact I’m not really a “Gun Nut” at all. As a Federally Certified Firearms Instructor I know a bit about a few different weapons systems that I either utilized during my time in law enforcement or became familiar with to train the military or law enforcement personnel who carried those systems. Although the Glock was not my choice of handgun nor was it the agencies that I trained, I have become somewhat enamored with it.

Gun fighting is an American Invention. One that occurs today every bit as much as it did in the wild west. So naturally guys like Samuel Colt are legend. Everyone knows that “God made man, but Sam Colt is the one who made them equal.” So its even more amazing how Glock came about to take its leading role in the American firearms market.

As it turns out the individual who’s name is now famous was never even a gun maker. Gaston Glock was  manufacturing plastic curtain rods when he heard complaints from the Austrian Army that no pistols existed that met their requirements. With his knowledge of plastics and polymers Glock believed that he could manufacture the weapon that the army needed. The final product was Glock’s seventeenth patent and also had a 17 round magazine capacity. Thus the Glock 17 was born.

The Glock 17 has fewer parts and is lighter, thanks to its polymer frame, than other similar handguns. With no manual safety it is also simpler to utilize. Fewer parts and the polymer design make the Glock  cheaper to manufacture and can be sold for less than the competition which made it appeal to cash strapped police departments. But the real deal sealer was its high capacity magazines.

By the 1980’s most street cops found themselves outgunned by the criminal element who were  increasingly arming themselves with more powerful and capable weapons.  At that time most cops carried the traditional six shooter, normally in a .38 caliber or the more powerful  .357  Magnum variant.  Cop culture, especially in the areas of training and equipment, is not easy to change.  The same high capacity firearms that the crooks were using were available to the cops but the powers that be resisted those systems. Many who had only handled semiautomatic weapons in the military were  wary because of their (incorrect) belief that those systems were prone to malfunctions or a jam. Or were too complicated to train on or maintain. In some cases communities opposed an increase in the fire power of the police while ignoring the increase in fire power of the criminals.

As a rookie cop in 1982 I was trained on the Model 10 S&W .38  Revolver. I could not help but notice that every sixth round it would absolutely and without fail stop shooting and would remain in that condition until you moved it from your firing hand to your non-firing hand, broke it open, turned it upside down, plunged out the empty casings which sometimes expanded and stuck in the cylinder and reloaded it two bullets at a time as you rotated the cylinder.

We trained that if the gun fight was still raging you would in the interest of speed and survival, load those two rounds, close the cylinder, switch the gun back to your shooting hand and rejoin the gunfight. At least for two more shots when you would have to repeat the reloading process.  Some of us used speed loaders which while faster than doing two rounds at a time were anything but speedy. Worse the bad guys knew or learned in prison to count. Even though they were crooks most could count to six, the point they knew a cop would be out of ammo. Of course most of us carried a second gun somewhere on our person for just such a contingency.

The Albuquerque Police Department at that time allowed its officers, at their own expense, to buy certain authorized semiautomatic handguns to carry on duty. It did not take many trips to the range watching my fellow officers who carried those semi-auto’s fire more rounds without reloading and then reload in one quick motion without ever taking their gun out of their shooting hand or off the target still with one round ready to fire inside it (never shoot a weapon to empty). I decided then and there that a “wheel gun” “malfunctioned” every sixth round, far more than what a semiautomatic might if it was properly maintained. I quickly converted to the Colt .45 1911 series. A weapon near and dear to my heart and one that I carried for the rest of my career.

Back to Gaston Glock.

Glock is one of those bigger than life characters. A chemical engineer by training he was 52 years old when he entered the gun making business. He worked tirelessly  in his basement with what was an innovative design using plastic for the frame and other parts. He would test fire his prototypes with his left hand in case one blew up he would still have his right hand to draw blueprints. After Glock became successful and rich a business associate who was after Glock’s wealth hired a former mercenary and proffessional wrestler to kill the gunmaker. Attacked in a dimly lit parking garage by the assailant wielding a mallet, Glock who was unarmed and 73 at the time, beat back the attacker knocking out several of his teeth in the process. Glock, even at 73 and unarmed is not someone you want to mess with.

Today Glock handguns are carried by half of American Law Enforcement officers and are the handgun of choice for many Americans to protect themselves their loved ones or their homes. It has become The American Handgun. Designed and built by a chemical engineer and curtain rod maker in Austria who is as tough as are his guns.

Paraprosdokian Sentence of the day: The last thing I want to do is hurt you. But it’s still on the list.

« REAL ESTATE CONFIDENTIAL: HOW THE HOUSING BOOM BECAME A HOMELESS BOOM
The Metaverse »